My childhood days comprise an amazing treasure trove amidst the vast wealth of memories I hold dear. Sometimes when the world lies still for a moment, I travel back in time to when I was a child and life could be described as nothing but blissful.

I don't know what it is about those days that gets my heart beating with such wondrous longing. I suppose it is the tangible love, intangible joy and a group of people who in my eyes still exude innocence.
I think my fondest memories are centered around my Tharavad, our ancestral home . In a cosy little corner there once stood a cosy little house that my grandparents, my grand aunt, my mum and her four sisters together built into a loving home. That's where I grew up. I remember the black painted iron gate that opened up to a large courtyard layered with concrete and surrounded by a plethora of flowering plants. The courtyard housed the main structure and an outhouse. Each corner holds in my heart a special place and I remember every scenario that played out in them.

I remember an enormous Bougainvillea tree  (with a money plant entwined around its trunk) right next to the gate; the bright pink variety. They were called "kadalas poovu" or "glass flowers" due to their translucent petals and I used to love collecting and storing them inside jars and boxes ( which of course my mum discovered after they rotted!). I was a bit of a mad cap when I was a kid. I once emptied a huge bottle of vicks, rubbed it all over my body, face and hair and sat under the bougainvillea sun bathing. My explanation was that I had seen it in a cartoon! And yes, I had stuffed the Vicks jar full of glass flowers as well! 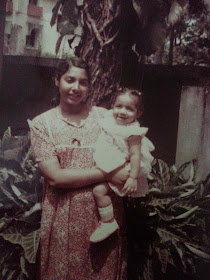 Judy aunty holding a tiny me. a part of the Bougainvillea is visible
behind us

Right next to the tree was the outhouse. My grandfather was a prominent figure in the society and constantly threw parties for his friends. I used to sneak in and steal a sausage or two from the table and run off before he could catch me! I was told that I would run in unannounced and dance like crazy  much to my grandfathers amusement! It was in the outhouse that I discovered the boogieman! An older cousin dared me to go in alone one night. I would have done it too if he hadn't introduced the boogieman and said that he hid in the dark waiting for kids to cross his path! Needless to say, my fear of dark places still remains!
From the courthouse we move to the veranda which had a huge portrait of my great grandmother hanging right over some of the most comfortable cane chairs ever! This was where I was force fed a revolting mix of onion and ginger juice for my tummy ache! Oh lord! How I had bawled and screamed! I also remember asking a newly wedded couple what a honeymoon was. In my mind, I had conjured up the image of a yellow coloured moon that dripped honey! Yum!
When all my cousins stayed over we would line up in the veranda toothbrushes stuck into our mouth and yawing the morning away! This image always makes me laugh! 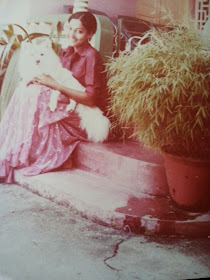 My gorgeous mum in her teens with her favorite pet Benji. This was the veranda 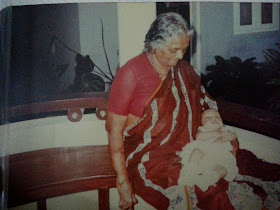 My grandmother holding Baby Neelu. The verada had such a beautiful sit out! 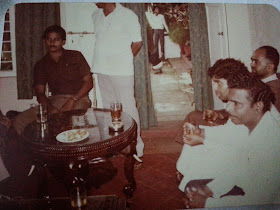 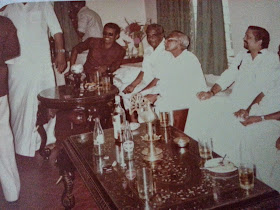 My Grandfather entertaining his scores of friends in the outhouse 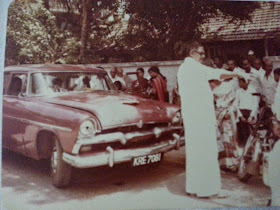 My Grandfather, a well known and loved figure in the society

The sitting room, 2 steps from the veranda was also our family prayer room. We were once praying and I had lazily glanced up at its white dome ceiling only to see a huge spider egg that had hatched peppering the white with thousands of tiny black baby spiders. Yes, I still am mortally scared of spiders. A happy memory there would be my birthday celebrations. My very 1st one and oh it was grand. I had on a cute little frock, it was presents galore, i was carried around by everyone and kept stuffing my face non stop with cake! 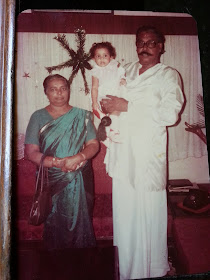 My first birthday celebrations in the living room

Then comes the dining room where uncountable numbers of breakfasts, lunches, teas and  dinners were served  and parties celebrated. Contrary to most family meals nowadays, we always ate together. There was so much food and conversation! It was amazing. I used to love sitting atop the table and sometimes when I was feeling particularly naughty, I used to crawl in between the dishes! One rainy afternoon I remember sitting on the table being hand fed rice and the most delicious fish curry I have eaten till date. I keep asking my mum what she put in the curry that made it so yummy; that my taste buds still remember the taste of it; and she says it was just some turmeric powder, onion, ginger and garlic. It was delectable indeed! 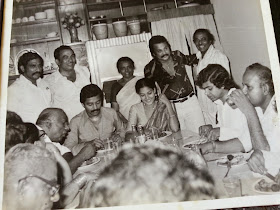 My parents engagement party feast was held in the dining room.

The store room and the kitchen right behind the dining room was always a place of wonder for me. When the cousins played hide and seek, I would always be found out because the store room was my signature hiding place. I had no issues being found out actually because for a few minutes I would be in a veritable wonderland, surrounded by bunches of enormous bananas hanging from the ceiling, sacks of onions, ginger, garlic and chillies, a whole rack of limes, more racks of carrots, beats, tomatoes and what not. It was such a pleasure peeking into each sack, taking in the smells and the feel of each vegetable.

The kitchen was basically hustle and bustle. So many meals had to prepare and my granny and aunties were always in combat with pots and pans. Two giant pots of rice would be bubbling away on wood fire stoves and the curries made on the single double top gas stove. There would also be a huge vat of papadoms made. My grandfather used to buy huge cane baskets filled to the brim with fish and dump it all over the kitchen and urge me to play! It was a joy indescribable! I used to jump into that pile raw fish and literally swim in it. Till his health deteriorated my grandfather used to keep up this amusing ritual. Till this very day raw fish does not repulse me and fish markets fill me with delight!

Another such delightful room was the main bedroom, we called it "ara muri". It was like a rumour mill inside our house. For every gathering the ladies would sit together there and gossip and the cousins have had umpteen games there. Plus it was the only room with a TV in it. Need I say more? Doordashan was awesome!
My favorite place in the room was the book shelf that extended from floor to ceiling. It was jam packed with books and since I was tiny, I used to keep climbing the long table in front of the shelf to reach the books and I used to stand on the table for hours on end trying to flip through each book from cover to cover. Once in my haste to reach the books I almost put my hand into an empty slot when I heard an angry hiss! It was a long, black shiny snake; an "anali", rather poisonous. I jumped back onto an adjoining bed and screamed my lungs out. I still remember the snake coiling uncontrollably when it was set on fire. My aunty Jaya also told me that I never used to let anyone throw things away especially if made of paper! After every school vacation, she used to clean the shelves of unwanted books, paper and what not. She used to throw them into a basket to empty later on and I used to pick it all up and store them in my treasures room. 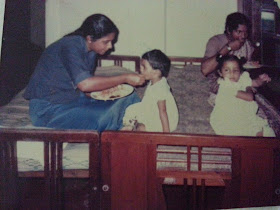 Oh! The treasures room was sublime. To you it may sound like an exotic little alcove but it reality it was a damp, neglected open space on our terrace under the water tank. But to me it was like Alibabas cave filled with precious delights. A set of push pins, an old ball, my collection of barbies, a stack of old plates, some colourful thread. I don't know what it was that made it so special but I did write a will to leave all of it to my child. To think I was all of 10 when I did that! The terrace was a lonely place but I loved it. There were 2 glass peepholes through which I could spy on the goings on in the dining room and the kitchen. Sometimes I used to throw sticks, mud and dried leaves down the peep hole and after a solid beating that stopped! Once my mother caught chicken pox and she stayed at my current house while I stayed at the tharavad. Every evening, jaya aunty would take me to the terrace from where I could see a particular room in my house and my mum and I would wave at each other.

The concrete courtyard was responsible for many a skinned knee (two in my case) during run and catch and held concert to make believe market places where stones, herbs and weeds plucked from the terrace pots were the wares. We cousins rode our cycles around till late in the evenings and slept together single file eagerly awaiting the crack of dawn and the crow of the cock. 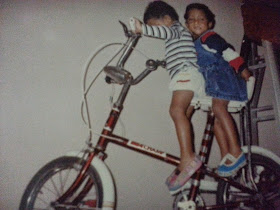 My brother and sister trying to "ride" my bike

My final and particularly stark memory is one of the feasts thrown at my house. Preparations would start two days ahead with the two car garage being turned into a makeshift kitchen for Vasu our resident cook (he preferred to be addressed as chef)! The smells that emanated were so tantalizing! Vanilla, cooking meats, pineapple and so much more! Chef Vasu prepared such lovely dishes! The menu was scrumptious! Pulao, kashmiri chicken, beef steak with French fries, raita ( which was then a delicacy!), liver steak, pork salmi (the yummiest pork dish ever!) And there would always be a trifle pudding for desert. His signature dish would be sticks of pineapple, cheese and cherry stuck onto a whole pineapple and handed around along with drinks. More than the presentation, I loved the preparation, I used to sit in the garage and stare into aluminium pots full of bubbling deliciousness! It was a splendid time indeed. 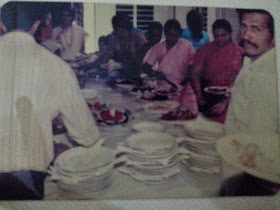 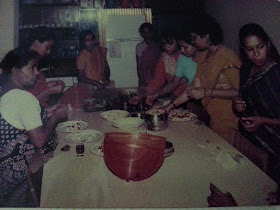 Feast after feast at home! See the famous cheese-pineapple-cherry appetizer?

The tharavad was broken down 17 years ago, modern architecture and style took its place; yet somehow a strong memory lingers. Sometimes when the evening draws to a close and a sleepy breeze flows all around, I can almost hear the laughs, shouts of joy, the clinking of dishes and glasses and a resonating feel of love everlasting.
Marilda Effect at Friday, September 12, 2014
Share